Thanks, I needed that

It was a particularly rough round with chemo this past week, but thanks to PZ Myers I end the week laughing like I haven't laughed in ages. 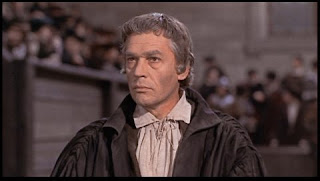 I know I saw A Man for All Seasons at least five times in theaters when it was first released. Each time I took away something new from Scofield's portrayal of Sir Thomas More.

A lift of the eyebrow, a slight gesture of the hand - there was always something new and meaningful to discover in his characterization.

Actor Richard Burton, once regarded as the natural heir to Laurence Olivier and John Gielgud at the summit of British theater, said it was Scofield who deserved that place. ''Of the 10 greatest moments in the theater, eight are Scofield's,'' he said.

Heard it all before

Newt Gingrich is saying that Geraldine Ferraro’s comment about Barack Obama was “childish” and “silly” — and “something that probably was true.”

In 1990, when Helms faced opposition for his Senate seat from Charlotte mayor Harvey Gantt, who is African-American, Helms ran a TV ad showing a white hand clutching a job rejection letter. The voice-over said: "You needed that job. And you were the best qualified. But they had to give it to a minority because of a racial quota. Is that really fair? Harvey Gantt says it is."

Unfortunately, the list goes on and on and on.

This is something Republicans have been spouting for ever. It's nothing new. The focus has shifted to include scary brown people, picking tomatoes that otherwise red-blooded white Americans would gladly pick, but it's still nothing new.

Geraldine, honey - move over to the other side of the aisle.

First of all, let me offer my sincere congratulations to Senator McCain for dealing with and (hopefully) conquering his problems with cancer and offer my best wishes for continued good health.

But he needs to release his medical records. I know it's a question of privacy, but when you're a nominee for president, the voters have a right to know.

In fact, Clinton and Obama should do the same thing.

Now. Even before the final nominee is selected.

But I'd also like Senator McCain to release the information on how he paid for all that expert, advanced treatment he received.

As a military veteran, member of the House, and Senator - my guess is that he received all that treatment mainly on the taxpayer's dime.

He most likely hasn't a clue about what it's like to have private insurance or crappy group health insurance or no insurance at all.

On a smaller note, Sen. McCain regularly takes Vytorin to keep his cholesterol under control.

According to the CVS online Rx price list, it runs $105.99 for thirty tablets.

Sen. McCain also owes it to the voters to tell them who pays for the Vytorin, and how much HE pays out-of-pocket, if anything.

Some say a 'Commander-in-Chief' threshold needs to be met or crossed; how about a Domestic Nightmares Chief?

I'm still alive & kickin', and though I expect to be alive after next week's 'chemo vacation', I may not be kicking too hard. I did much, MUCH better with the nausea and fatigue after the second round, but that 'fatigue' factor is pretty difficult to surmount.

In addition to nausea and fatigue, I have The Gummint to deal with. The first hurdle was Social Security Disability...and I passed. I've qualified. The only fly in the ointment is that there is a mandatory five-month waiting period before any checks start rolling in - which in reality works out to six months.

Now it's on to Medicaid, with all it's incredible rules, regulations, and red tape. My first interview with a case worker is a blur; I'm still totally confused as to deductibles and the rules regarding 'spending down' to the maximum income level.

That 'maximum level' is pretty atrociously low. I CAN remember a time when our income was at that level, but that was probably thirty years ago when just about all necessities (food, gasoline, etc) were below a dollar per unit and before health insurance costs exploded.

I do know this - we've worked for years to scrape together some very modest retirement savings. It's quite likely that we'll have to cash them out completely to pay medical bills in order to qualify for Medicaid.

For myself, it's no big deal - but I just hate to beggar Mr. Andante and put his retirement in financial jeopardy.

We hear economists moan occasionally about the abysmal personal savings rate in the United States, which is pretty ironic considering medical expenses can wipe out any savings you manage to accumulate.

So, broken record time....single payer health insurance is the only way to go. Under a single-payer system, we would be paying a reasonable premium for medical care and there would be no question of liquidating our life savings to pay for it.

Not only is our present so-called system bad for business, it's bad all around for American citizens and bad for the all-around national economy.