This Day in History

I've got to remember this one, as it's highly unlikely it will happen again.

I took my mother to the hospital for an outpatient procedure this morning, arriving at 8:40 a.m. for a (scheduled) 9:00 a.m. unltrasound.

I was loaded down with crossword puzzle books, the newspaper, etc. so we wouldn't be bored to tears during the inevitable wait.

The last time I was there the wait was three hours, during which time I knitted a scarf and finished an entire crossword puzzle book.

My mother has a 'muscle knot' in her right butt cheek, which as a 93-year-old Southern Lady, she refers to as her "hip". This can lead to all kinds of consternation on the part of the uninitiated health care providers, who start planning x-rays and such until I jump in and tell them it's just a pain in a butt muscle.

Sitting for more than a few minutes is hell on her and hell on anyone within listening range.

A volunteer whisked her out of the car into the building while I parked the car and the good man stood guard over her until I returned to make sure she didn't wander off.

The admission process was smooth and quick.

The same volunteer wheeled her to the outpatient clinic, where we only waited maybe five minutes to be called.

We were out within maybe 20 minutes. The angelic volunteer waited with her while I went to get the car, rolled her out, and helped her gently into the vehicle.

I've been pinching myself all morning.

If I've learned one thing in caring for my mother, it's that using a walker, or better yet - a wheelchair - can be a useful to smooth your way. Gray hair and wrinkles seal the deal.

Works pretty good in airports, too.

Speaking at Rivier College, which offers nursing degrees, he said he isn't completely opposed to the kind of government-run, single-payer system used in Canada and many European countries, but prefers to give consumers a choice.

"I'm starting to warm up to it a little bit because I get very frustrated with insurance companies. ... They tick me off, and I wish I could say, 'You're out of this business,'" he said. "The problem with that is, fundamentally, I believe every American deserves choice."

Richardson said he'd rather control the insurance companies and force them to do the right thing. Under his plan, insurers that want to participate in the federal plan would be required to put 85 percent of their premiums toward direct care. He also said he worries that a single-payer system would create an overwhelmingly complex bureaucracy.

"I hate bureaucracy," he said.

"If you hate bureaucracy, how can you like HMOs and insurance companies?" Richard Ingram called out from the audience.

Ingram, of Hudson, told Richardson that he has seen how frustrating, complex and varied health insurance plans can be both from his own experience with colon cancer and from running a health clinic for people with little or no insurance.

"If you asked every single person in this room the specifics of their health coverage probably not one could tell you the specifics of what their policy covers and doesn't cover," he said. "I think what we need is one plan that covers what people need, and that's it. Otherwise you're going to end up with just a different mess than what you've got now."

Left hook, right hook, uppercut, whatever works. Every single candidate deserves to have some sense knocked into them about their bosom-buddy health insurance companies.

Have any of these characters ever had to actually USE their health insurance? Of course they have - but they are covered by heavily taxpayer-financed plans that are affordable to all but the poorest. And I'll bet the ranch they've never had a claim denied and had to go through the appeals process for medically indicated treatment - which may be the Mother Of All Red Tape.

I'll give Governor Richardson a couple of style points here for saying he'd like to control the insurance companies and force them to do the right thing. The government should be doing that anyway.

How about forcing ALL insurers to put 85% of their premiums to direct care, not just the companies that "want" to participate?

The health insurance companies shouldn't be the only ones given a "choice".

Should the only "choice" given consumers be of the cheapest premium with the least coverage because your family needs food, shelter, and clothing? Or the "choice" of which company will restrict your coverage to only the health providers with whom the company has cut a deal?

Do NONE of the Democratic presidential candidates have the guts to say what they must know is a better option?

So here's a memo to the Democratic candidates (again, with the exception of Kucinich):

So, candidates - what's your problem? 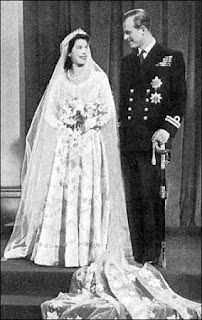 Queen Elizabeth II and the Duke of Edinburgh on their wedding day, November 20, 1947.

Sixty years. Wow. These days there aren't that many couples who manage to stay married for six years.

Once upon a time I got a close-up, in-person look at her as I stood with a bunch of gawkers at a wreath-laying ceremony at the Lincoln Memorial.

It was nearly thirty years ago, but I still remember that gorgeous, peaches-and-cream complexion and lovely blue eyes. No photograph has ever done her justice.

It was in the middle of a day that started very early for her and would end late. But she appeared relaxed, smiling and even had a little twinkle in those baby-blue eyes.

Regardless of what you think of the monarchy or the convoluted lives of the Windsors, surely anyone must admit the queen has performed her duties with dignity and devotion.

Happy Sixtieth to "Hon" and "Cabbage" - and may you enjoy many more.

...and raise money for your defense fund.

Gonzales devoted much of his speech to encouraging students to enter public service, despite the criticism that public officials like himself endure.

The fervency of that criticism was readily apparent as several protesters stood with their backs turned toward Gonzales throughout his speech, frequently interrupted him with calls of “liar” and “treason” and, in some cases, stormed the stage.

In an audience of about 1,500 people at the Phillips Center for the Performing Arts, Gonzales had several dozen supporters who gave him standing ovations.

Not even up to Bush approval percentages.

But for $40,000 Gonzo is apparently willing to run the gauntlet. 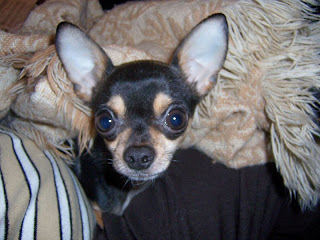 Pippin the Grandpuppy peeks out from under a blanket on his Grandma's lap.
|
// posted by andante @ 11:05 AM

Wishing for some health care karma

I hope the Massachusetts health plan works out, I really do.

It's not single-payer, which would be most sane people's choice, but if it can make health insurance more affordable and available to more people - good on Massachusetts.

Besides, a success would blow a big hole in Mitt Romney's schtick about "Hillarycare continues to be bad medicine."

Who says there was no post-invasion planning?

I've used more than a few of these type charts myself, from medical problems to computer repairs. 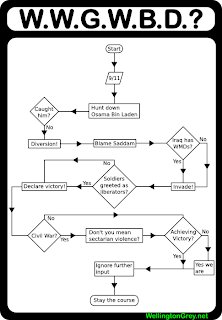 I can’t believe it’s been 10 days since I posted anything here. I have plenty of excuses, but you know what? I think “outrage overload” pretty much covers it.

Just when you think the Bush administration can’t screw up any worse - it gets worse. I have no comment except maybe just "Damn".

John McCain is catching a bit of flak for his chuckling response to a supporter asking “How can we beat the bitch?”.

Really, John – a ‘straight talker’ should be able to come up with a better response. Something along the lines of “This cranky old bastard personally respects the bitch”.

Cabarrus leaders met with billionaire Bruton Smith for more than an hour this afternoon, pitching an incentives deal worth under $70 million to convince him to keep Lowe's Motor Speedway in Concord.

I don’t suppose I’ll ever live to see the day, but I wish our fine civic leaders would just tell businesses to invest their own money in their own businesses and stop trying to extort money from taxpayers.

I see some of the Democratic presidential candidates want to give everyone access to the same health insurance as federal employees. I’ve taken a look at the rates for North Carolina(PDF), using the family plan with those fine, greedy folks at United Healthcare Insurance, Inc. as an example.

The total monthly premium is $792.13, which is just about in line with the quotes we’ve gotten for a private, comprehensive policy.

That “employer” would be the taxpayers.

Cough it up, folks – I’m way overdue for a physical.

I may be the only football fan in the universe not watching the Pats/Colts game.

That's because my baby made a quick trip home to show off her new toy. 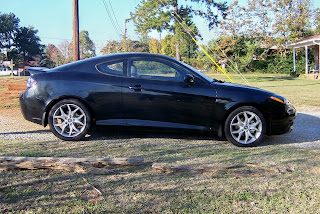 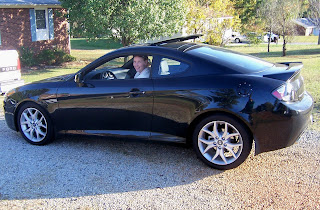 It's a 2007 Hyundai (yes, a Hyundai) Tiburon GT. The kind of thing that makes any driver over 30 look silly.

And no - we didn't help her buy it - she's the one in the family with money.