Not your everyday war memorial

LONDON, England – A war-mutilated Prince Harry is the symbolic fallen hero in a memorial honoring those willing but unable to serve in the Iraq conflict. Harry, brother to Britain’s future king, was poised to be the most celebrated soldier of the Coalition forces, but due to the “specific threats to kill or kidnap him,” he was kept home. However, Prince Harry will be remembered for his intended tour of duty in a memorial to be unveiled at the Trafalgar Hotel October 11th courtesy of Bridge Art Fair.

“Iraq War Memorial featuring the Death of Prince Harry, the Martyr of Maysan Province” draws inspiration from Harry’s willingness to sacrifice for his country, and the sympathy for his disappointment of an unfulfilled patriotic aspiration.

The Memorial features Prince Harry laid out before the Union Jack with pennies placed over his eyes and head rested on the Bible. The statue suggests the tragic outcome of a confrontation in Iraq’s Maysan Province with the Iranian weapons smugglers for whom Harry’s tank regiment was scheduled to patrol. Prone with his unfired gun still holstered, Prince Harry is represented clutching a bloodied flag of Wales, and holding to his heart a cameo locket of his late mother, Princess Diana, while a desert vulture perches on his boot. Harry’s head is earless, denoting the explicit threats against the Prince from militia leaders saying they planned to send him back to his grandmother “without his ears.”

Sadly, the only memorials our 'royal' figures can muster up might be Dick Cheney with one-thousand-dollar bills over his eyes, or Rudy! clutching his draft deferments.

The possibilities are endless.

Has Tom Tancredo's head exploded yet?

If everyone could be well, there would be no health care crisis.

That seems to be the main point of the (few) Republicans offering solutions to the nation's health care problems, which is sort of like saying "if every vehicle could run on spit, there would be no energy shortages".

But as Steve Jacobs writes in the Sacramento Bee -

"For health care providers, it isn't profitable. They get paid to do stuff: surgeries, procedures, lots of patient appointments.

Spending the time to nag you about smoking and excessive food intake doesn't ring the cash register.

No one opposes prevention. As a political stance, none is safer. Well over half of U.S. health care costs stem from individuals' poor lifestyle choices. Bad habits do not have many advocates.

But relying on people to change them, thus ultimately creating the funds to help cover the uninsured, is a fairy tale."

Wellness and preventative services are very important, but who can benefit from them if they aren't affordable?

Can I just add that, as a Democrat, I would also like free ice cream, a free pony in my back yard, and free pancakes for breakfast every day?

I'm not aware of anyone - Republican, Democrat, or little Green Martians who think they can actually get 'free' health care. It's got to be paid for somehow, whether it's paid for out of the patient's pocket or withheld from a paycheck - it ain't gonna be free.

You knew it all along, didn't you?

Cowboy Bush is afraid of horses.

For the historical record, here's a photo of the Bush with the closest encounter his butt has ever had with a saddle -

If we are going to use the tax system to pay for health care anyway then why should we waste funds on the profoundly inefficient system of segregated private health plans? A universal risk pool that is equitably funded through the tax system is the most efficient and least expensive method of ensuring comprehensive coverage for everyone.

I've been looking at Hillary's "American Health Choices Plan", and really - I don't see much to distinguish it from the (few) plans offered by the (few) Republican candidates.

Tax credits to help me buy insurance? Fine. But I can't wait until tax-time to purchase it. I need it NOW.

And will my tax credit be increased yearly by the amount the insurance company chooses to hike the premiums?

I'm not holding my breath on that one.

I'll cast my vote for president for anything that has a (D) next to the name, but don't expect me to donate money and time to the effort unless they are willing to go toe-to-toe and eye-to-eye with Big Pharma and the Health Insurance Hogs. Until those mega-bucks industries get a little lovin' from federal regulators, prices will continue to skyrocket.

Tax credits? Give me a break.

It's just an excuse for the industry to stay on the gravy train.

Are you sitting down?

Sorry to shock anyone, but -

Private insurance companies participating in Medicare have been allowed to keep tens of millions of dollars that should have gone to consumers, and the Bush administration did not properly audit the companies or try to recover money paid in error, Congressional investigators say in a new report.

The investigators, from the Government Accountability Office, said the money could have been used to reduce premiums or provide additional benefits to older Americans.

Under federal law, Medicare officials are supposed to audit the financial records of at least one-third of the insurance companies each year. But the investigators said the Bush administration had fallen far short of that goal and had never met the “statutory requirement.”

If private insureres are screwing Medicare - the most carefully audited health insurance in the country - it does make you wonder what sort of skullduggery they're pulling on the non-Medicare market.
|
// posted by andante @ 9:18 AM

When the driver-side window in my car got stuck in the 'down' position, I just knew it was going to rain.

No sign of rain yet (we could sure use it), but a mechanic friend replaced the little motor in the door for only $25.00. That's what friends are for.

Our days of being completely uninsured, health-wise, may soon come to an end. Mr. Andante and his boss have been working with an agent on catastrophic coverage that will suit our needs. Hopefully something will be in place soon, and hopefully before any catastrophe strikes.

And best of all....my soon-to-be-93 year old mother with Alzheimer's will be getting a home health care aide three times a week. The burden on me has been pretty heavy; having someone come out to supervise her shower, help her dress, and so forth will lighten the load a lot. 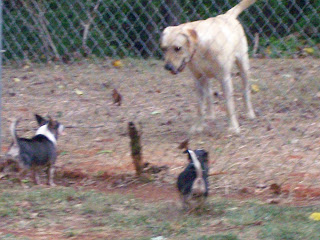 If it weren't for this fence, we'd kick your golden butt!

My mamma always said "Don't poke a rattlesnake with a stick".

This 'family values' guy abviously had some poor raising -

The stupid man is gonna get bit.

Ditto this gal, though her snake-poking could get a lot of people worse than bitten.

A shame there wasn't a 'show images' button above or below or anywhere else.

I was looking forward to getting that higher diplloma.

I generally stay out of the political primary stuff...heck, by the time I get to vote here in North Carolina my choice is between The Already Annointed One and maybe a couple of single-issue back-of-the-packers.

Edwards also said that voters should ask all presidential candidates "one question: Does your plan cover every single American?" He added, "Because if it doesn't, they should be made to explain what child, what woman, what man in America is not worthy of health care. Because in my view, everybody is worth health care" (Lorentzen, AP/San Francisco Chronicle, 9/2).

The conservative wailing will be deafening, but maybe THEY can explain what child, woman, and man in America is unworthy of health care.