We are accustomed to summer evening thunderstorms.

We're not accustomed to having our backyard floodlights take a hit.

There was a blinding flash of lightning and a crash of thunder that shook the entire house. The metal door on the circuit box blew open, and one (one!) breaker was tripped.

The cable modem was toasted, and our digital phone service went dead.

Oddly, the cable television was fine....sort of. The colors were reversed.

For example, suddenly the Mets were wearing reddish-colored uniforms, and the Cardinals uniforms were blue. All stations were the same.

Don't ask me why the television was still on....Mr. Andante is the Remote Person in this household.

A neighbor, retired from the telephone company, said something about "reverse polarity", which sounds sensible to me.

The cable repairman just shook his head and said "Beats all I ever heard". 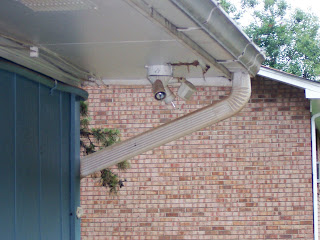 The view from below - 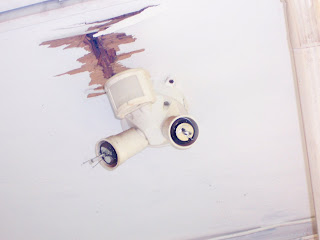 Where is the outrage?

I spit on you, World's Sexiest Vegetarian contest!!!

The Blogosphere's Sexiest Vegetarian didn't even make the finals.

I demand a recount.
|
// posted by andante @ 4:20 PM
Your jackass limit has been exceeded

VENICE, Florida (AP) -- A man who lost his ball in a golf course pond nearly lost a limb when a nearly 11-foot alligator latched on to his arm and pulled him in the water, authorities said.

Bruce Burger, 50, was trying to retrieve his ball Monday from a pond on the sixth hole at the Lake Venice Golf Club.

The alligator latched on to Burger's right forearm and pulled him in the pond, said Gary Morse, a spokesman for the Florida Fish and Wildlife Conservation Commission. Burger used his left arm to beat the reptile until it freed him.

The pond at the sixth hole has a "Beware of Alligator" sign.

This fellow really needs to work on his reading comprehension skills. And perhaps his life priorities.
|
// posted by andante @ 3:21 PM

After all, if Cheney's not in the Executive Branch he can't claim executive privilege.

I spend most of my free time these days trying to keep my mild-to-moderate Alzheimer's afflicted mother from becoming a danger to herself or the community, which is why my posting has been pretty pathetic lately.

That's why if this pans out I'll be first in line.

A revolutionary drug that stops Alzheimer's disease in its tracks could be available within a few years.

It could prevent people from reaching the devastating final stages of the illness, in which sufferers lose the ability to walk, talk and even swallow, and end up totally dependent on others.

The jab, which is now being tested on patients, could be in widespread use in as little as six years.

And that's just to the caregiver.

Do a little dance, say a little prayer, cross your fingers and hope this vaccination works out.

And get out of my way when it becomes available.

Honest answers to difficult questions
I'm still 'shopping around' amongst the Democratic candidates and haven't made a purchase. Yet.

At the moment, I'm just collecting and digesting honest answers to difficult questions.

Here's one from Hillary in a telephone interview with Salon's Walter Shapiro:

Question - Six months into a Hillary Clinton administration, about how many U.S. military personnel do you envision being in Iraq to handle what you've referred to in the past as "vital national security interests" -- from helping the Kurds to preventing Iran from crossing the border?

Answer - I cannot give you a figure because I will not become president until January 2009 and there is no way to predict what will occur between now and then. I have said repeatedly that I am committed to taking our combat troops out of the midst of this sectarian civil war. And there may well be vital national security interests that require a continuing presence, although I do not support permanent bases or a permanent occupation. When I'm elected -- and between the time that I am elected and the time I become president -- I will focus to a great extent (and nearly to the exclusion of a lot of other important matters) on being ready to make those decisions once I become president.

But it is just impossible to make any kind of credible predictions at this point. I am still hoping that the president will decide to follow the Iraq Study Group's recommendations and begin to alter the makeup and mission of our force before he leaves office. I think it is his responsibility to do that. So that's my principal emphasis during this time -- to try to persuade or require him to take the steps that I would have to do initially if he has not.

As much as I like to hear "pull them out yesterday", this approach is far more honest, realistic, and responsible.

And whoever the next president might be, it would certainly be nice to have someone who is honest, realistic, and responsible. A nice change after our long national nightmare, hmmmm?

Banks must pay the same interest rate on savings as credit card companies charge on balances.

I suppose most American progressives have at one time or another - especially in the last seven years - stomped their feet and sworn to up 'n' leave this country.

Please don't. You are needed.

But should you decide it's just too much, you can refer to Tony Wheeler's Axis of Decency -

Bhutan - Home of the Gross National Happiness Index and a popular king, though the Nepalese might disagree.

Costa Rica - disbanded their military over six decades ago, ecotourism.

Go directly to the unemployment line

Humana on Friday unveiled a health insurance product for self-insured employers in Florida with 300 or more employees that will limit annual increases in health care costs or refund employers a portion of administration fees charged by the company, the Orlando Sentinel reports. Under the program, called "Smart Results," Humana promises that if it is unable to fulfill its financial and customer service goals, it will refund up to 40% of the fees it charges to administer the health benefits.

According to Beth Bierbower, Humana's vice president of product innovation, companies would receive financial projections for annual health costs based on claims history, with increases guaranteed to be no higher than 9% but that could be as low as 2%. Employers would be required to make a three-year commitment to Humana and establish health programs for their workers (Wessel, Orlando Sentinel, 6/2).

I can see the memo on part of that commitment now:

To: All Employees
From: Management
Re: Health care costs

Effective immediately, all medical costs will be paid solely by the employee.

Filing a claim will lead to immediate termination.

Have a nice day! 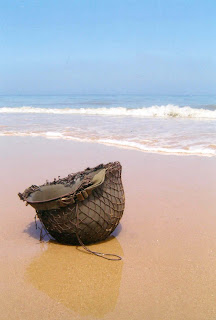 Libby sentenced to 30 months in prison

Lewis "Scooter" Libby, former chief of staff to Vice President Dick Cheney, was sentenced Tuesday to 30 months in prison for lying to investigators looking into the leak of a CIA operative's identity.

He also was fined $250,000. Libby was convicted March 6 of four counts in a five-count indictment alleging perjury, obstruction of justice and making false statements to FBI investigators.

I prefer to think of this as Dick Cheney sentenced in absentia.

Finally getting out of Iraq

I, for one, am very pleased the Bush administration is hinting at a 50+ year occupation of Iraq.

Given the Bush administration's penchant for living in Opposite Land ("Clear Skies" equals "Set Loose the Polluters", and so forth) we can be assured planning is underway at this very second to get out of Iraq and hold that victory parade, probably starting tomorrow.

Snark aside - I have been wondering what will happen to all those foreign workers brought into Iraq by Halliburton, et al?

Do we really expect the corporate fat cats to provide them with emergency evacuation plans?