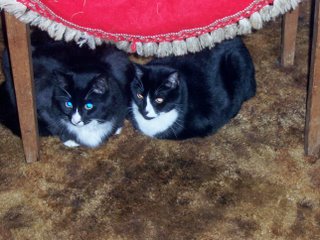 Can we come out yet?

Note: The Collective Sigh Christmas tree is always placed on a table to put it out of Chihuahua range.
|
// posted by andante @ 11:14 PM 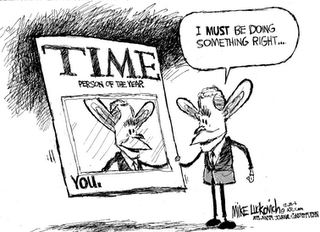 These days I haven't had an opportunity to explore whether or not we are losing the war in Iraq.

But one thing I do know - Christmas is winning the war on ME.

Every year I resolve I will do more to make this season less hectic and therefore more enjoyable. Every year I goof up that resolution. I must have REALLY goofed this year.

I give up; I wave the white flag; I kneel in abject surrender. I am swamped, have no time for Yuletide joy, and I'm broke.

I hope O'Reilly and his ilk are happy about that, but for some reason I doubt the baby Jesus is smiling.
|
// posted by andante @ 1:16 PM

Who cares what the little people think?

...about 85 percent of seniors want to let the government use its buying power to negotiate drug prices, including 65 percent who said they strongly favor such negotiations, the Kaiser Family Foundation reported Friday. Only 12 percent opposed or strongly opposed government negotiations.

And no surprise here, either -

Republicans, trust me - it's not just the Iraq mess, but stuff like this that is getting you booted out of office.
|
// posted by andante @ 1:57 PM

Thank you, Senator Wyden (D-OR) for our hard work to solve the problem of exploding health care costs.

Called the "Healthy Americans Act," the plan would require that employers "cash out" their existing health plans by terminating coverage and paying the amount saved directly to workers as increased wages. Workers then would be required to buy health insurance from a large pool of private plans.

After two years, companies would no longer have to pay the higher wages. Instead, Wyden said, they would pay into an insurance pool, based on annual revenues and the number of full-time workers.

The Lewin Group, a Virginia-based health care consulting firm that reviewed Wyden's plan, said it would reduce health spending by private employers by nearly three-quarters, and would save $1.4 trillion in total national health care spending over the next decade.

But let me 'splain something.

This is more-or-less the same situation in which we find ourselves. We pay for a private policy, and Mr. Andante's employee gave him a raise to help pay part of the monthly premium.

But the private insurer, God love 'em...they still charge an arm and a leg for the monthly premium. And in order to get this "low" rate, we have to accept an ungodly high deductible - not just on medical care, but on prescriptions, too.

I suppose if one of us got run over by a truck or had super-major surgery, we might reach the deductible.

Until then, we pay a ghastly amount each month for the privilege of saying we are insured - but still can't afford to go to a doctor or buy medication.

The catch in Sen. Wyden's plan will be that 'health insurance pool'.

Not so much who is in the pool or how many are in the pool - but what savings (if any) await the consumers.

Saving employers money is fine and dandy, but if their employees still can't afford medical care - what's the point?

It's not going to be enough to create big pools. There will have to be some strong-arm tactics with the medical profession, suppliers, and maybe most of all these guys.

Unka Karl sez I been a good boy this year and done everything I was told.

Since I been so good, I need a special present real bad.

Can you leave some Irack Strategery under the White House Christmus tree?

And a speech to go with it?

And please leave me a kool uniform to wear when I speechify.

You can trust industry to police itself.

It's the American way. 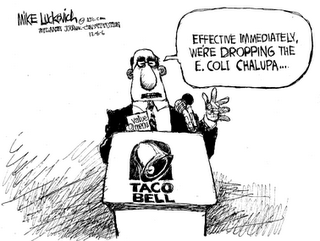 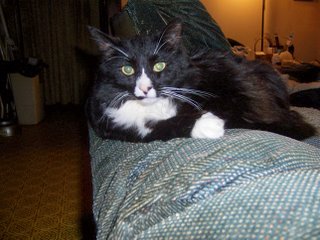 When Trouble reclines on the back of a recliner, it tends to...well, recline as if by magic.

My own recliner isn't getting much use lately. My mother is slowly sinking into dementia, and requires thrice-daily visits with pills (she can't remember to take them herself), twice-weekly physical therapy, and at least once-weekly trips to various doctors.

At least she's pretty good-natured about it. I follow her around the grocery store (after zipping through doing my own shopping), putting back stuff that she doesn't need (Mom, you already have two heads of lettuce in the fridge) or reminding her that she can't eat salty bacon and sausage or caffeinated coffee and then confiscating another head of lettuce that she picked up when my back was turned.

She apologizes sweetly for her collapsing short-term memory, then grabs another head of lettuce.

I can't wait to do this to my own daughter.

Actually, no. I would no more do this to another human being than I would...say, ask them to fight a senseless war in the Middle East.

Which reminds me - Dubya says he's not looking for a 'graceful exit' from Iraq. I've been wondering what the hell that means.

A very wise old music teacher once told me that whatever you do, you should practice the ending of a piece of music until it's nothing short of spectacular.

An audience will forget your flubbed beginning or your hesitant middle - but if you finish up with a bang, THAT is what they will remember.

If George wants to pull his legacy out of the sewer, he needs to come up with a good ending for the Iraq war. Hopefully, it's not one with a lot of BANG or BOOM, but the possibility of a 'graceful' exit was pretty much shot when they neglected all that post-invasion planning.

I'm sure better minds than mine have grappled with a way to get out of Iraq gracefully - but I haven't heard any good suggestions.

At this point, the most 'graceful' exit I can imagine involves helicopters on rooftops.

Hogs at the health insurance trough

From the Alliance For Retired Americans:

According to the Indianapolis Star, health insurance CEOs are continuing to feast on executive pay. The paper listed the total compensation from 2004 to 2005, including salary, bonus, restricted-stock awards, long-term incentive payouts, stock-option gains and other payments, for several insurance executives. The list included a startling $135.5 million for William McGuire, the UnitedHealth Group CEO who later resigned amid a scandal over the timing of stock-option grants. Also listed: $57.5 million for John Rowe of Aetna, $42.1 million for Edward Hanway of Cigna, $14.1 million for Larry Glasscock of WellPoint, and $5.7 million for Michael McCallister of Humana. A separate survey by the advocacy group Families USA found annual premiums for family coverage in Indiana rose almost 77 percent from 2000 to 2006. A third survey of 1,201 adults by ABC News, Kaiser Family Foundation and USA Today found that 50 percent of respondents named excessive profits by drug and insurance companies as one of the biggest factors in rising costs. WellPoint attributes rising costs to increased use of the health-care system. "The survey by ABC, Kaiser, and USA Today is telling," said Ruben Burks, Secretary-Treasurer of the Alliance. "The public knows the true reason behind the high prices."

I'm particularly nauseated by the $42.1 million for Edward Hanway of Cigna.

Those are the folks who wouldn't pay for my eye surgery.

And Wellpoint, attibuting the rising costs to "increased use of the health-care system"?

Give me a break. When people can't afford to pay medical bills, they don't seek preventative treatment.

The word for these vultures is.... 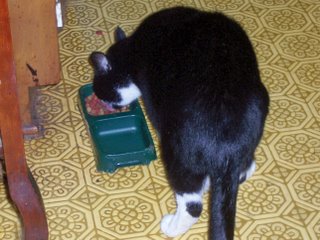