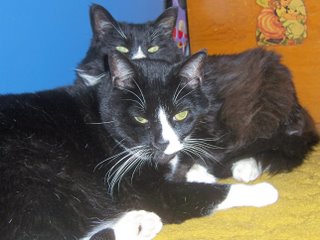 What the Great Writ wrote

Habeas Corpus is the very bedrock of freedom. Lest there be any misunderstanding -

Known as the "Great Writ", the writ of habeas corpus ad subjiciendum is a legal proceeding in which an individual held in custody can challenge the propriety of that custody under the law. The prisoner, or some other person on his behalf (for example, where the prisoner is being held incommunicado), may petition the court or an individual judge for a writ of habeas corpus.

The legislation before the Senate today would ban torture, but let Bush define it; would allow the president to imprison indefinitely anyone he decides falls under a wide-ranging new definition of unlawful combatant; would suspend the Great Writ of habeas corpus; would immunize retroactively those who may have engaged in torture.

The people who fail to preserve habeas corpus are not the ones you can count on to protect the nation and preserve liberties.

He hits Bush and his opponent, George Allen, hard on Iraq - but there's a terrific line in there that can be used for ANY issue -

"The people who failed to prevent this disaster are not the ones you can count on to fix it."

A little tweak here and there, and you can use it to address any of your potential constituent's concerns.

"The people who designed the atrocious Medicare Part D plan and won't allow Medicare to negotiate lower prices can't be counted on to fix the problem".

"The people who forced through the inefficient and unfair 'No Child Left Behind' legislation can't be counted on to fix the schools.".

Are you speaking to people in a disaster prone area?

Are you being told Republicans are better at "keeping us safe"?

The people who have failed to find the anthrax killer and haven't implemented or funded basic safety procedures in our ports and borders are not the ones you can count on to keep us safe."

See how easy it is? There isn't an issue in the spectrum that can't be answered effectively.
|
// posted by andante @ 12:27 PM

The BBC really should be more careful with their headlines, like this one from the "audio and video" section - Bush fires strike near Sydney.

I was somewhat relieved when I realized the aggressor was actual "fire" and not "Bush".
|
// posted by andante @ 12:49 PM
Good news, bad news

Millions of older Americans are confronting a temporary break in their Medicare drug coverage this month that will require them to pay the full cost of their prescriptions or face the painful prospect of going without.

This is the "doughnut hole" in the new Medicare drug benefit that began in January, and advocates for seniors say there is nothing sweet about it. Some seniors knew nothing of the coverage gap until they were hit with a bigger drug bill, advocates say.

Attention, Wal-Mart shoppers: Buying prescription drugs is about to get cheaper in Tampa. Under a new program, Wal-Mart customers in that area will be able to buy nearly 300 generic drugs for just $4 for a 30-day supply. Wal-Mart said it plans to offer the deal to all Floridians and in other states next year.

Inquiring minds want to know - why can't Medicare use it's purchasing power to do the same?

(Yes, I do know why - Big Pharma profits and campaign contributions. But every senior - nay, every citizen - should be asking the same question).
|
// posted by andante @ 11:07 AM

Wow - if the U.S. drug system is broken Canadians must be dropping like flies.

The federal system for approving and regulating drugs is in serious disrepair, and a host of dramatic changes are needed to fix the problem, a blue-ribbon panel of government advisers concluded yesterday in a long-awaited report.

The analysis by the Institute of Medicine shined an unsparing spotlight on the erosion of public confidence in the Food and Drug Administration, an agency that holds sway over a quarter of the U.S. economy. The report, requested by the FDA itself, found that Congress, agency officials and the pharmaceutical industry share responsibility for the problems -- and bear the burden for implementing solutions.

The FDA has been throwing stones from their glass house, covering their own incompetent butts and shielding Big Pharma from the curse of lower profits.

America is NOT the Evil Empire

I assume our interrogators at least ask questions. 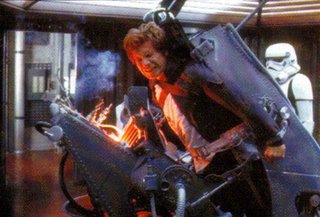 LEIA: Why are they doing this?

HAN: They never even asked me any questions.

(The Empire Strikes Back)
|
// posted by andante @ 3:05 PM
Just a little hint to Democratic candidates

By all means, certainly you should run on the economy.

But while you're at it, you might want to mention the global economy, and the fact that psychopathic maniacs are in charge of our foreign policy.

When a nation is perceived as a rogue nation, an agressor - the economy stumbles to a screeching halt. 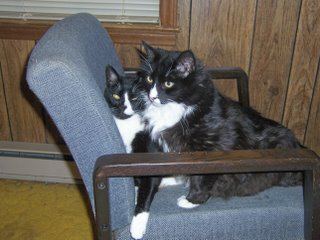 A rerun of a typical Randy & Trouble pose. 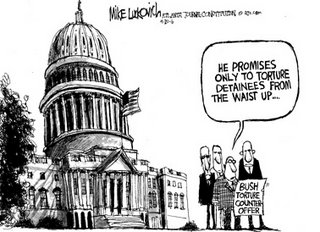 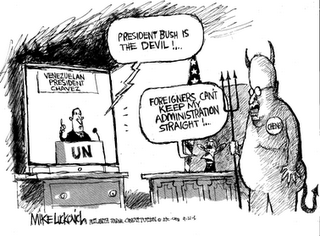 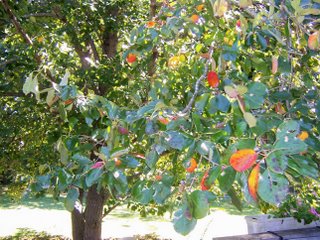 If you went to school in the 50's and 60's, you probably remember this: 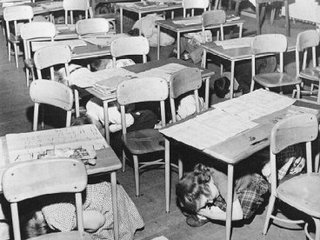 Alternately, there was the equally useful "herd everyone into one big room" tactic for dealing with the End of the World:

When we heard the school bell ring its special ring - different than a fire drill ring or dismissal bell - we sprang into action from our desks.

Teacher calmly reminded us it was an air raid drill, “Form two lines,” she barked sternly. We obliged, filing out the doorway.

In the hallways our long neat rows would have shown those Russians. Our lines were the best in the world. We marched proudly in the corridor and filed into the gymnasium.

Quickly and quietly we lined up, then even though we were in our good school clothes, we lowered onto the floor assuming the air raid drill position.

We had our left forearm under our forehead and our right arm over the back of our head with a hand over our ear to muffle the sound of the end of the world. - Anthony Buccino, "Air Raid Drill Memories From Under The Desk"

Now John "What Constitution?" Yoo tells us it was all in vain...there were "no serious national security threats to United States soil".

I spent all that time with "duck and cover", trying to keep my rear end covered (in those days, girls had to wear dresses to school) when all I really needed was duct tape, plastic sheeting, shopping, and Wise Men like John Yoo to ward off annihilation. 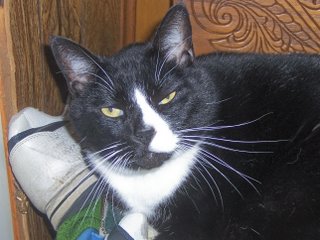 From the Ironic Times

U. S. NEWS
**Senate Report: Saddam Had No Ties to Al Qaeda
But he was close to Rumsfeld.

"Ironic times", indeed - I can't think of any period during my lifetime when the times have been more ironic.
|
// posted by andante @ 2:23 PM
FUBAR to the nth degree

Emerald City exposed - Journalist Rajiv Chandrasekaran pulls back the curtain on the Green Zone in Baghdad to reveal the flops and failures of the Bush war team.

And here you thought all that money down the drain was bad.

The last sane governor of Texas passes from this life

What a classy broad.

And yes, as an unclassy broad myself, I consider that a high compliment.

I've been sitting around, trying to think of something profound and important to say regarding the fifth anniversary of 9/11.

Nothing that hasn't been said already, and better.

Just profound sadness at the loss of life, profound horror at the negligence of our leadership, profound disgust with the politicization of the catastrophe, and profound uneasiness with the continuing destruction of our military.
|
// posted by andante @ 12:08 PM

display the flag at half staff from their homes on that day, and to observe a moment of silence beginning at 8:46 a.m. eastern daylight time to honor the innocent Americans and people from around the world who lost their lives as a result of the terrorist attacks of September 11, 2001.

I think I've got a better idea.

The majority of Americans, who believe Dear Leader is full of crap, should step outside at 8:46 a.m. eastern daylight time, face the direction of the White House, and scream - 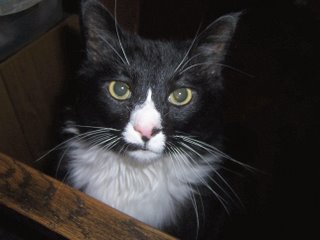 Proof positive that Trouble the Clueless has a second expression.

Great, just great. Hiring private contractors to do the recruiting.

Where does this end? Why don't we just scrap the military altogether and put out an open call for mercenaries?

Watch that last step; it's a doozy 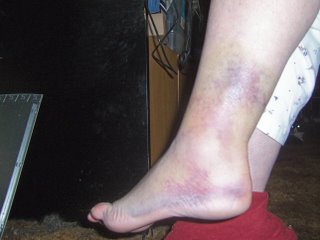 My sprained ankle, in all it's technicolor glory.

he U.S. military shot down a target ballistic missile over the Pacific Friday in the widest test of its emerging antimissile shield in 18 months, the Defense Department announced.

If we can convince North Korea or Iran to set up their missile launching bases in Alaska, let us know when they're going to fire at us, and promise to only attack in good weather - it's a slam dunk.

For some strange reason, I keep thinking of that Normandy invasion thing....
|
// posted by andante @ 9:03 PM